Adopting CEAS for Your Community 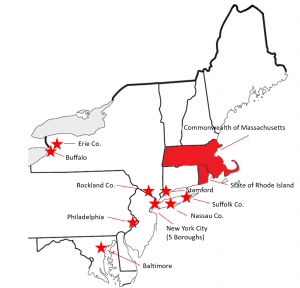 The CEAS program has been a successful public-private partnership in local, county, and state governments since 2004.

Governments interested in sponsoring a CEAS Program in their community should contact the Customer Support Center to schedule an introduction to the CEAS program.

To achieve its mission, BNET partners with both governments, public agencies and private sector organizations to improve community resiliency through the sustainability of businesses following a disaster. Recognizing the vital role that private sector businesses play in disaster recovery, BNET helps communities overcome the obstacles to recovery through its critical employee credentialing program. Our partners listed below represent some of the most progressive disaster preparedness organizations in the nation.

Massachusetts Emergency Management Agency (MEMA)
MEMA is charged with ensuring that the Commonwealth of Massachusetts is prepared to withstand, respond to, and recover from all types of emergencies and disasters, including natural hazards, accidents, deliberate attacks, and technological and infrastructure failures. MEMA partnered with BNET in 2015 to create the first statewide CEAS program in the nation.

City of Buffalo, NY
The City of Buffalo pioneered public-private partnerships by being the first city to pilot the CEAS partnership in 2003. The goal of the partnership was to mitigate economic damage by helping businesses quickly recover following an emergency.

Philadelphia, PA-  Office of Emergency Management
The Managing Director’s Office of Emergency Management (MDO-OEM) is responsible for ensuring the readiness of the City of Philadelphia for emergencies of any kind through an integrated and collaborative program that educates the public on how to prepare for emergencies.  MDO-OEM partnered with BNET in 2007 to lessen the impact of emergencies on the City's businesses.

City of Baltimore, MD - Mayor’s Office of Emergency Management
The Baltimore City Mayor’s Office of Emergency Management (MOEM)  maintains the highest level of preparedness to protect Baltimore’s citizens, workers, visitors, and environment from the impact of natural and man-made disasters. The MOEM partnered with BNET in 2009 to help Baltimore-based businesses of all types and sizes to be as prepared as possible for the next emergency.

Nassau County, New York-  Office of Emergency Management
Nassau County Office of Emergency Management's mission is to maintain a high level of preparedness in the county, and  to mitigate loss of life and vital assets prior to, during, and immediate aftermath of a disaster; and to facilitate the speedy recovery of Nassau County following a disaster. It is for this reason they partnered with BNET in 2009 to promote preparedness among the County's businesses.

Suffolk County, New York-  Office of Fire, Rescue & Emergency Services
Suffolk County has taken steps to ensure that businesses in the County remain operational and viable wherever possible in the wake of an emergency or disaster, by partnering with BNET to implement the new Corporate Emergency Access System (CEAS) in 2009.

Rhode Island (Statewide) - Rhode Island Emergency Management Agency
The State of Rhode Island has taken steps to ensure that businesses in the State remain operational and viable wherever possible in the wake of an emergency or disaster, by partnering with BNET to expand the City of Providence's CEAS program Statewide in 2017.

Erie County, New York-  Division of Emergency Management Civil Defense/Disaster Preparedness
The Civil Defense/Disaster Preparedness Division executes the County plan for civil defense and disaster relief before, during and after any type of natural, man-made disaster or war time situation. Erie County joined the City of Buffalo in 2008 to expand the CEAS program to entire County.

“As a New York-based company located a quarter-mile or less from where three major terror attacks and one earthquake have occurred in the past 25 years, we rely on the CEAS program to ensure that our key personnel, whose roles are vital to the protection of our people, brand, and operations, obtain the access required to support our Crisis Response / Crisis Management teams.”

"The CEAS Program makes it easier for businesses to recover when a major disaster occurs."